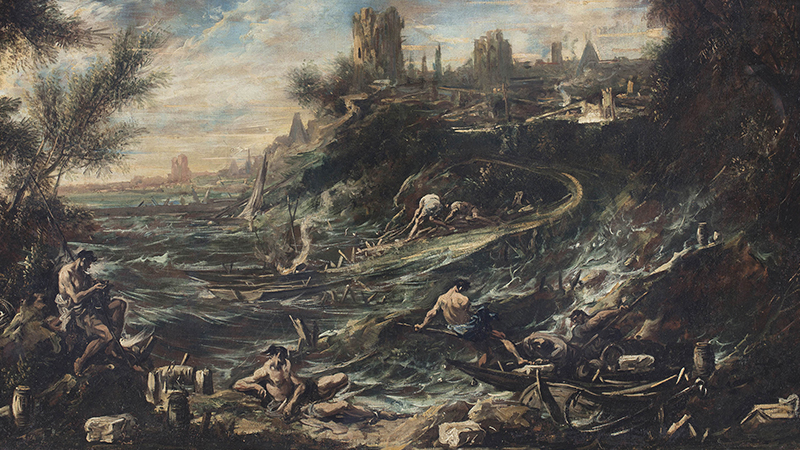 In the first of the two paintings, today still unreleased, two male semi-naked figures sit in the front row on the side of a sea inlet and another figure drives a thin boar filled with bags. At the centre of the scene, below a rock surmounted by the ruins of a tower, two fishermen pull back the nets. On the rock, you can distinguish some buildings that raise against the light blue sky crossed by clouds; on the horizon, the resemblance of another tower appears. The scene is framed by two groups of trees with moved and untidy branches. In the second painting, in the front row, two male figures on the left and two friars on the right observe by the beach the sinking of a vessel that had been smacked into the rock at the centre of the scene. On the rock, a tower raises; on the horizon, on the left, some buildings can be distinguished, on the right of the rock, the sea is crossed by clouds and the scene is framed by trees.

The two paintings are characterised by the same measures and stylistic and iconographic features and were executed as pendants; the pictorial writing of the figures, the objects and the landscape are that typical of Alessandro Magnasco, both in the course of the brush strokes and in the chromatic setting, which is based on the brown and green tonalities, with touches of bright filaments which enlighten the sea waves and highlight the objects. The sea crossed by clouds is of an intense light blue which – as we know from the analysis of the pigments carried out years ago on some paintings sure to be of the author – is realised with the Prussian Blue, the first chemical colour used by the European painting, in the first half of the 18th century in Italy only known by the Venetians and Magnasco. The contacts of the painter from Genova with Venice, attested by his biographer Carlo Giuseppe Ratti, explain the technical update of the artist in relation to this pigment, realised in Germany in 1704.

If the attribution to Magnasco of the human figures in the two paintings appears undoubtable, a further in-depth analysis is necessary to also attribute to the artist the landscape. Based on the pictorial writing which characterises the figures, the two canvases can indeed be dated in the years 1726-1728 when, after the death of Antonio Francesco Peruzzini in 1724, the landscape painter Magnasco worked with for about thirty years, the painter from Genova also realised landscapes in a style which clearly took after the Peruzzini, as learned by Antonio Francesco who, older than him, was next to him in many pieces. However, the characteristics of Peruzzini’s paintings – very detailed description of the branches and the undergrowth and volumetric clouds that took after those of the Tempesta – are not present in these canvases, where bushes and branches are summarily represented with brush strokes, the clouds break out in twisted and lumpy touches and sea waves are quick jerks and bright filaments, characters that are typical of Magnasco. Here, Magnasco adopts the landscape typologies typical of Peruzzini to develop in a pictorial way the language towards a full disgregation of the descriptive data in a quick bright annotation. In the extreme developments of the speech of the artist (the St. Augustine of Genova’s Palazzo Bianco, the Baptysm of Christ at Washington’s National Gallery that can be dated around 1740) the absolute freedom of the brushstroke will overtake the typically decorative character of the “genre” in the expression of an emotional intensity very far from the cheering up intentions of the “villages” and “sea landscapes” of the contemporary painting of the 18th century.

The two paintings presented here certainly are among the most spectacular and virtuous proofs of Magnasco in the “sea landscapes genre”. The very high pictorial quality and the compositive structure of great scenic effect make them two pieces of art of his maturity. In contrast with the serene Arcadian “villages”, clearly drawn, of many contemporary artists such Carlo Antonio Tavella from Genova, Magnasco represents two windy landscapes dramatically disturbed, inhabited by disjointed figures which move with disconnected rhythm, denying to the shapes any volumetric consistency and any drawing definition, with a livid and listless colour which enlightens only in the intense light blue of the sky and in the brightness of the clouds. Even in his numerous Landscapes with figures, as in the sacred scenes and mythological representation located among the ruins of the architectures of Clemente Spera, the artist expresses his nonconformism refusing the simple pleasantness and the hedonistic language of these “genres” traditionally characterised by a reassuring decorativism.