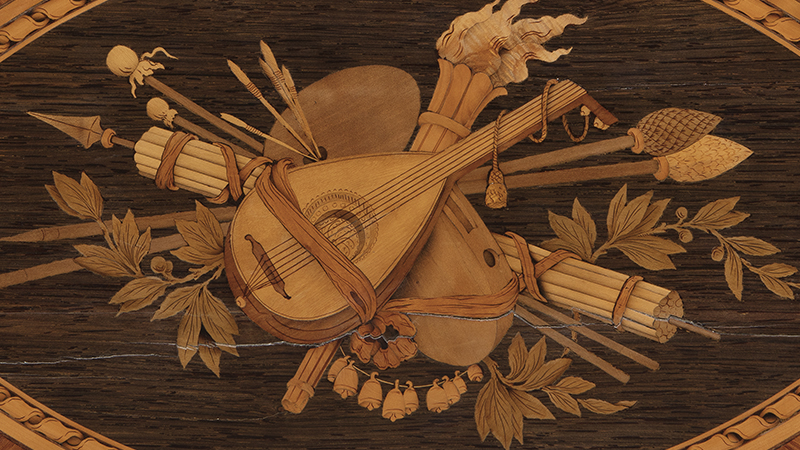 Giuseppe Maggiolini has been one of the most important Italian cabinet-makers of Neoclassicism. Below, an in-depth analysis of professor Giuseppe Beretti on an unpublished coffee table of 1806 presented by Antichità Giglio on the occasion of Modenantiquaria 2018.

A coffee table with the allegory of Love, Music and Painting

It is the spring of 1806 when a new client arrives in the laboratory of Giuseppe Maggiolini in Parabiago. The first order is a commode, today lost, of which a testimony remains in a paper (R.M. B 582) in the Found of the paintings of the workshop at the Gabiniet of the paintings and the Art Collections at the Municipality of Milan. It is the study for the decoration of the inlay of a side of a piece of furniture; Maggiolini writes the date “April 1806” on it. In July, he comes back to order a small table: a gift for her young wife with a very beautiful trophy at the centre of the countertop which conjugates the allegorical attributes of Love with those of the Music and Painting. It is the unpublished small table we are writing about, recently rediscovered in a private collection. The woman must have loved the husband’s gift a lot that will become his embroidery table; she used it for a long time as the signs which the clamps of the pincushion and the swift left on the back of the piece of furniture testify. Many are the drawings that Maggiolini dedicates to this small and refined piece. In September, maybe once completed the small table, Maggiolini receives from the same client a further order for two “sciffoni” (bedside tables) as a drawing with friezes’ studies testify (R.M. B 714).

But what do we know about the customer? We only know his surname: “Grassi”. Maggiolini writes it down on some of the paintings which talk about these orders but, as always, he is cheap of further information which would be of certain interest to us. We could hypothesise that it is a rich bourgeois, maybe a lawyer – since many are the lawyers among Maggiolini’s clients in these first years of the 19th century. Very likely he is someone in relation to the Napoleonic court in Milan which in these years, after the coronation of Napoleon as an emperor, who demonstrates to love the furniture of that who had been the engraver of Archduke Ferdinando. It is the Napoleonic government in these years, such as for the drawings and the notes on them testify, to absorb almost completely the energies of the laboratory of Parabiago. The most important order which had taken Maggiolini back into popularity in a Napoleonic Milan, after the difficult years between 1796 and 1803, was that of the couple of commodes which Maggiolini made in 1804, ordered by the vice-president of the Cisalpina Republic Francesco Melzi, for the bedroom of Napoleon in the palace now called Imperial of Milan. Many more followed that one: big desks for ministerial use, serre-papier and, mainly, game tables – many still stored today and well documented in the drawings of the workshop.

We then move to the small and unpublished table we are writing about, made in the Summer of 1806. It has got tapered and grooved legs, inlaid right below the jointing pillar to the bands that hide a long drawer that comes out laterally. From the inside of the opening of the drawer, a small secret mechanism allows to unblock the reversible countertop, inlaid on both sides. Today, from what I know, it is a unicum in the production of Giuseppe Maggiolini.

The paper which firmly connects our piece to the orders of Mr. Grassi is the drawing that reclaims the decoration with grapevine shoots for the four corner reserves on the side with the rose window at the centre of the countertop (R.M. A 189) (Fig.1). the engraving along the border by the hand of Giuseppe Maggiolini, says: “Small table Grassi 1806 July”. The correspondence between the drawing and what Maggiolini inlaid in maple wood on a rosewood background is clear and does not leave space to doubts on the fact that the drawing would be drafted and used exactly for the inlaid of the table under consideration.

Of a bigger quantity are instead the papers which represent the complex allegorical trophy of Love and Arts inlaid in almond at the centre of the richest side of the countertop. The original idea of this beautiful theme is of Giuseppe Levati who completed it on a signed watercolour paper, maybe still of archduke epoch (R.M., B 156) (fig.2), of which a pendant exists (R.M., B 157). The drawing that Maggiolini uses for our table is that specified in the paper of 1801 for a “tavoletta Rosati” (R.M., B 393) (fig.3).

In comparison with that proposed by Levati, the galls to which the two trophies were hanged. He translates it, in the cut as in the burin profile, with absolute fidelity to numerous details. The inlaid of the trophy in which lute, tambourine with bells, sticks, brushes, palette, poles, torches and bundle (to represent the lasting unity of marriage) appear, it is made an extremely refined inlaid. A true “painting with woods” with tiles of different wood essences was chosen with great attention to the pictorial output. The set, braided with green olive leaves, stands out for its richness and brightness on the background of a very dark rosewood which almost seems ebony. Another painting refers to the frieze with cartelle, antemioni (technical names of decorations) and acanthus flowers inlaid in two oblong reserves in maple wood on the same dark background of the almond. The theme is presented, with few variations in comparison to what realised, on a working paper (R.M., B 619) (Fig.4).

The four reserves with flowers in polychrome woods on mahogany backgrounds which frame the almond are made, as a habit of Maggiolini, just like overly emphasised improvisations using papers with specimens of flowers and leaves still stored in big quantity among the papers of the foundation of the drawings. The refinement of the inlaid work, the brightness of the woods, the delicacy of the shades, together with the naturalistic attention for the numerous floral species, made these bouquets real masterpieces.

It needs to be said that this side of the countertop sums up to the beauty and compositive richness, a preservation state more unique than rare. Clearly, it has been remained for a long time sheltered by the light which oxidises and alters the tones of the delicate polychrome woods, the brightness and the extraordinary refinement of the shade passages which the contemporary could appreciate is still today completely enjoyable. Here we manage to understand the reason why the reporters of the time defined his inlaid works as true “paintings with woods”. The last drawing refers to the frieze with antemioni inlaid on the bands below the countertop (R.M., A 442) (Fig.5).

Decorative motive taken by vascular art at the time defined as “Etruscan”, in 1806, it is a theme of great modernity destinated to become of common use, thanks to the drawings which Pelagio Pelagi will hand over twenty years later to Gabriele Capello, for the furniture of the court of Carlo Alberto in Turin. The rest of the ornamental themes of the inlaid works that are not specified in the reported ad-hoc studies, such as, for instance, the rose window framed by delicate shoots, the tiny borders of the edge of the countertop, the two small butterflies, the inlaid works on the legs and those on the corner pillars, also find many confirmations in workshop’s drawings that Maggiolini used combining them at his pleasure.

A characteristic of the furniture of these years is the application of new and fashionable materials. And here we find wide coats of mahogany and very dark rosewood veneers, adapted to highlight, such as in the inlaid of our furniture, the brightness of his delicate inlaid works still of Louis XVI’s taste. Rarer is the citronnier which here Maggiolini uses as a background in the frieze of Etruscan taste of the bands.