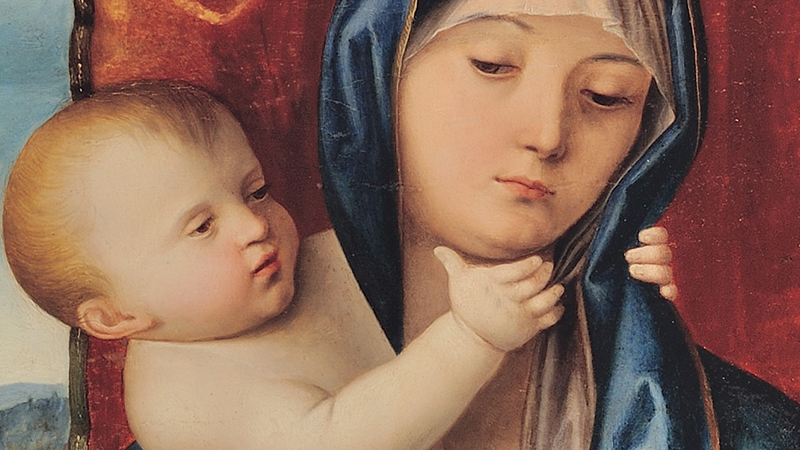 Bernardo Licinio was quite surely born in Venice in 1489 from a family which had its origins in Bergamo. The first news we have on his life date back to 1511, the year in which he resulted to be already professionally active exactly in Venice, where he frequented the study of Giovanni Bellini, one of the most important Venetian painters of the time. We start having more precise information on Licinio only at the beginning of the 20th century, thanks to the studies of Professor Gustav Ludwig; as a matter of fact, Giorgio Vasari had not known the painter and created confusion attributing his paintings to the painter Giovanni Antonio Licinio called Pordenone.

The first pieces of Licinio highlight the influence of the style of the major exponents of the Venetian High Renaissance, among which Bellini, Cima da Conegliano and Vittore Carpaccio.

A CANVAS FROM THE HAMILTON COLLECTION

This important piece, depicting the Madonna with the Baby with St. Joseph and St. Mary Magdalen, presents, as a matter of fact, a composition and a style that are very affected by Bellini’s artistic influence. The setting of the work presents itself as quite composed, symmetric and tidy, reminding of one of Bellini’s pieces exhibited at the Galleries of the Academy in Venice, the Madonna with the Baby between St. John the Baptist and a Saint. The colours are also those types of Venetian painting of High Renaissance: bright and iridescent in the clothes and feeble in the background, with an almost atmospheric sky.

Almost surely, Licinio, for the realisation of this painting, mainly took inspiration from another piece of Bellini: the Madonna with the Baby, 1480-90, exhibited at the Art Museum of San Paolo in Brazil. The piece presents itself, as a matter of fact, basically analog both from a compositive point of view and stylistic and chromatic to the central section of our painting; the figure of Mary and Baby Jesus are alike in the pose and also in the colours of the dresses. Other similarities with the piece are to be found in the drapery and in the hilly landscape in the background and in the signature.

The composition seems stiff and quite static but also played on the soft lines of Baby Jesus who is represented in the act of hugging his mother; the Virgin keeps her face slightly bent looking at his son and keeping him on her lap with extreme delicacy. The faces and the surfaces are very polished, and the details are meticulously curated. All these elements, despite the rigidity of the poses, give great sweetness to the piece.

The painting comes from one of the most famous European art collections, the Hamilton Palace Collection, a collection of works of art of the most important European artists, among which Tiziano, Leonardo, Tintoretto, Rubens, Rembrandt, Van Dyck and many more; the collection had been completely sold to Christie’s in 1882 following a financial crisis of William- Douglas Hamilton, XII Duke of Hamilton. The work of Licinio was actually catalogued under the name of G.A. Pordenone, The Holy Family with the Magdalen and it results to be sold exactly to Percy Wyndham of Salisbury, an important English military man, politician and art collector. The erroneous attribution is due to the above-mentioned confusion created by Vasari in the “Vite”.

Antichità Giglio exhibited this piece in the occasion of Modenantiquaria 2017.

For further curiosities on unpublished pieces visit this page!