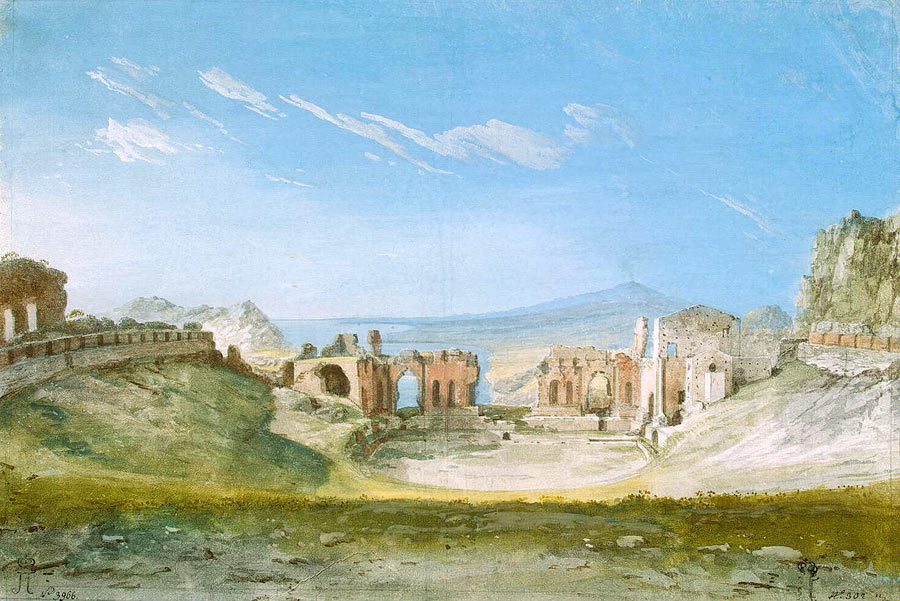 Summer readings: a trip to Sicily with Jean Houel

For trip to Sicily different from usual, following the Voyage of Jean Houel.

This theatre [the theatre of Syracuse] resisted many centuries, but it could not survive to the endless events that happened in Syracuse. During the years of disorder and darkness that followed to the moments of great artistic splendour, all the sections built in stoned and adapted to the base rock went destroyed […] This noble building has become a place of abandonment a nature, always active, retook control over the piece of art, deleting step by step everything that art created taking it away from it. The different characters mixed together contributed to the formation of a new piece: a mixture of rough and squared rocks, in which you can recognise a staircase and a deep trench can be recognised, trees, herbs, moss, seats, some destroyed and others well-preserved, separated by fosses filled with topsoil, flowers grown on the senators and citizens’ seats.

They seem to be words that describe a painting depicting an ideal “Landscape with ruins”, in reality, it is an extract from the description of the Theatre of Syracuse in the Voyage of Jean Houel. But our hypothesis is not that far away from reality since Houel is a writer but also a painter and architect; it is thus easy to read his words as images and follow his Tour with the numerous paintings which complete the work. As a matter of fact, Houel in the preface reassures us in this way: I validate my paintings with my writings and I confirm my writings with my paintings. The pleasantness of these readings indeed consists in traversing cities, palaces, ruins, archaeological sites or panoramas through the drafts of Houel. However, his descriptive ability let us imagine the paintings too, gouaches or drafts of other artists who characterised the epoch of the Grand Tour.

The author lives in Sicily from 1776 to 1788, a period in which there are many visitors from Europe that start the renowned formation trip to the beauty of the Italian Greek and Roman ruins. Houel, at the same time, is attracted to the Greekness of Sicily but also opens our eyes to the fascinating nature of the isle and its costumes; sometimes he uses an illuminist cut, others instead a cut filled with exoticism. The complete title of the work itself announces this to us: Voyage pittoresque des isles de Sicilie, de Malte et de Lipari, où l’on traite des Antiquités qui s’y trouvent encore; des principaux Phénomèn que la Nature y offre; du Costume des Habitans, & de quelques usages.

The four folio volumes, equipped with the 264 gouache tables, went out between 1782 and 1878 and present us a complete Sicily. Houel the artist praises the virtues of the arts, but not all of them: as a lover of classicism, he does not value the Baroque of Noto or the Dome of Catania but he is fascinated by Villa Palagonia. Houel the naturalist instead investigates the Etna, the coasts, the marine deposits and the mountains, Houel the scholar of customs presents us the habits and religious celebrations such as the feast of St. Agatha in Catania, the Corpus in Syracuse or the rural feasts such as that of the harvesting.

A guide of great spirit for whom would like to undertake a trip to Sicily retracing, as far as possible, the same places. Less poetic but surely more practical for the traveler, the text taken from Voyage: “Viaggio in Sicilia” with the introduction of Carlo Ruta (Edi.bi.si, Palermo 1999).