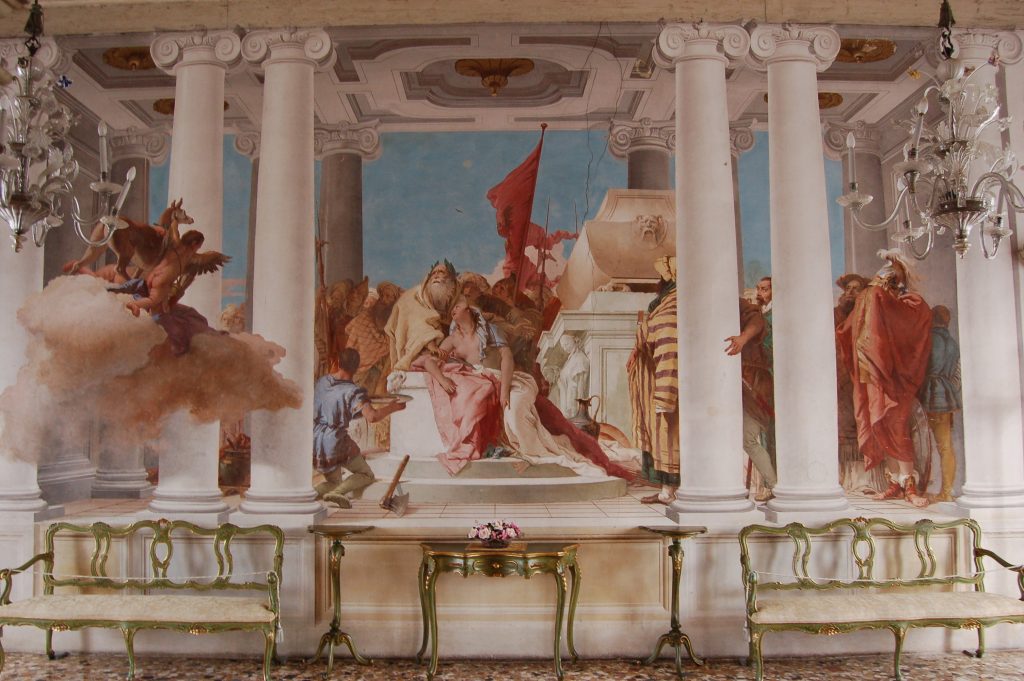 The Rococo Period began in France in the first half of 1700 and had its maximum splendor before neoclassicism spread throughout the western world. Rococo is also often identified as “late Baroque”, in fact, it represents the final phase of the Baroque period.

The Rococo style spreads and particularly interested the aristocratic class, which commissioned sophisticated and pleasant works to adorn their living rooms. Later, however, the style also spread among the bourgeoisie.

Around the time of the death of the Re Sole of France in 1715 and approximately until the beginning of the French Revolution in 1789, France experienced this period of transition characterized in the artistic field by a style which is rich in complex and not symmetrical forms.

Compared to the massive and imposing Baroque, Rococo has a delicate and light style. In particular, the paintings are characterized by the presence of soft colors, undefined contours and curved lines. The ornaments are often very detailed and there is a recurring lack of symmetry.

The painting of this period is devoid of dramatic and solemn themes in favor of a less celebratory and more pleasant style. The subjects of the paintings are in fact graceful and elegant and are intended to arouse the pleasure and enjoyment of the viewer.

Often the paintings portray episodes of worldly life, games or pastimes, courtship in rural environments. The ultimate goal is to represent a society that loves luxury and at the same time harmony and beauty.

In addition to paintings that represent scenes of worldly and luxurious life, a type of scenic painting is also very spread. The protagonist is Gian Battista Tiepolo (1696-1770).

Gian Battista Tiepolo is one of the greatest Rococo artists in Italy. The Venetian matures an airy and light style, characterized by the perspective illusionism typical of his time. Tiepolo apprenticed with Gregorio Lazzarini, a well-known Venetian painter, entering his workshop in 1710.

The painter immediately showed great eclecticism and great ability to quickly absorb any type of suggestion from the outside and then elaborate a personal style. Already at the age of twenty, the artist performs works independently and safely. His first famous works are the apostles executed between 1715 and 1716 for the church of the Ospedaletto in Venice.

The masterpiece of his youth, however, is the Martyrdom of San Bartolomeo, executed in 1722 for the church of San Stae in Venice. It is an extremely dramatic and theatrical work obtained from rapid brushstrokes and plays of light.

Among the works of his artistic maturity period, however, we cannot fail to mention the frescoes of Villa Valmarana ai Nani in Vicenza, a work completed together with his son Giandomenico and Girolamo Mengozzi.

Tiepolo was also a skilled caricaturist.