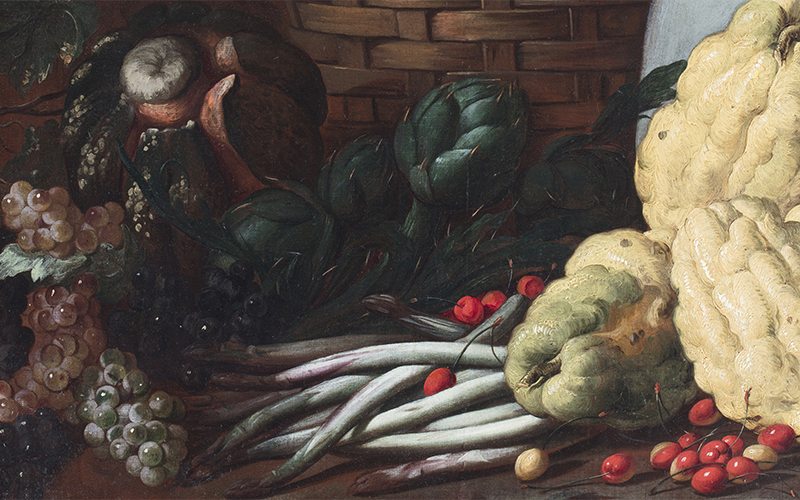 Still-life is a painting genre that consists of the depiction of flowers, fruits, animals, wild games and objects of daily use in a work of art. The term is translated as still-Leben (German) and still life (English), expressions which literally means “immobile life”. In Italy, as in France, there is not a precise translation and only in the 18th century, it was used for the first time the expression nature morte. This pun was born in the academic clubs but with a negative aspect, differently from the original meaning. But where and when does still life have its origin? And when does it start to become an autonomous painting genre?

The most ancient testimonies of representations similar to still life date back to the Roman and Hellenistic Age with rhyparography and the xenia. The rhyparography was a type of painting that represented humble and small objects, while the xenia were small paintings representing flowers, fruit and poultry which were given to guests. In the Medieval period naturalistic elements are found in paintings, mainly in Flemish painting, but in a fragmented way, between the end of the 15th century and the beginning of the 16th century instead, in Italy, we find floral and naturalistic elements in the inlaid works.

Still life between the 16th and the 17th century

At the end of the 16th century, maybe both because of the reborn interest towards the antique and because of the curiosity towards naturalistic and scientific things, painters began to paint flowers, fruit, wild game and instruments. A further motivation is maybe to look for in the attempt to overcome the serious hierarchy of the genres, which gave space as independent genres only to religious or historical subjects and paintings. In these years, the first paintings with still life are thus realised both in Italy and in Flemish and Spanish painting. The first Italian painters who tried this genre are Giuseppe Arcimboldi, the Campi’s family, Ambrogio Figino, the Bassano and Bartolomeo Passerotti to which many more will follow.

In 1620-30, Vincenzo Giustiniani, in Speech over the painting, attributes to Caravaggio the celebre phrase ““che tanta manifattura gli era a fare un quadro buono di fiori, come di figure” (Which that much mastery was necessary to make a good painting of flowers, such as of figures). With this claim, the genre of the still life gained dignity for the first time and began to be considered an autonomous genre. Caravaggio claimed thus that there was no difference in between painting historical-religious paintings or portraits or flowers and other objects: the quality of a painting overlooks what it depicts. As the first painting of still life in Italy, it is considered to be, as a matter of fact, the Fruit basket of Caravaggio of 1599.

Despite the official critique despising the new genre, the bourgeois collectors preferred it to the great paintings of historical-religious subject, also because of the small dimensions, and began to order many of them.

Flowers’ paintings in the 17th century

In the 17th century, especially in Rome, painters realised paintings depicting flower triumphs, requested to decorate in a spectacular way the villas and palaces of the noble families. Flowers’ paintings became, as a matter of fact, fundamental elements in the Baroque’s decorations to make it triumphant and lavish. In Rome and Naples the most important painters of this genre were active, and they often came from abroad: Mario de’ Fiori, Carlo Maratta, Abraham Brueghel, Nicola Vaccaro, Giovanni Stanchi and many more. In Flemish art too, it was very popular to paint flower vases in a precise and detailed way.

With the Realism of the second half of the 19th century, in France, an interest in the genre of still nature has been renewed. New painters observers of reality return to depict flowers, fruit and objects of daily use. The painters of the end of the 19th and 20th centuries use the genre to experiment with new painting styles and techniques, of which the first innovators are Paul Cézanne and Vincent Van Gogh. In the 20th century, the interest in still life is always present and it is testified by the realisation of various exhibitions and specific publications.