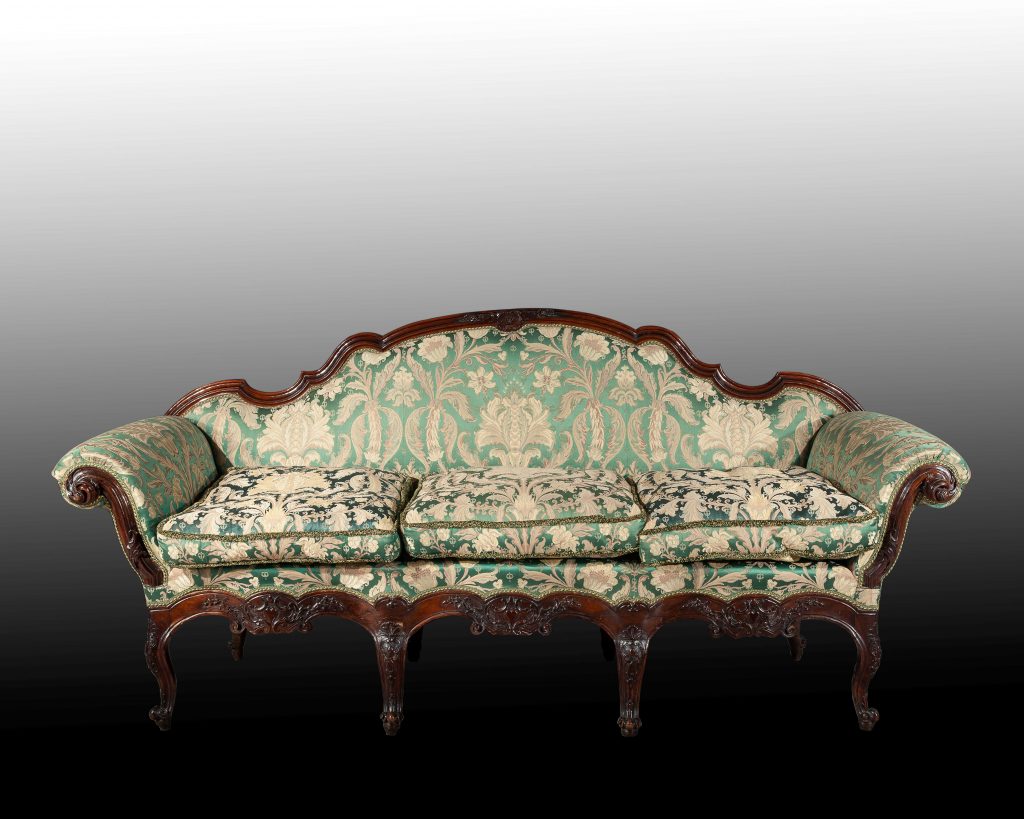 The sofa is born

The evolution of the history of furniture has seen and sees the arrival of the disappearance of pieces of furniture and objects in relation to how men change their way of inhabiting the house. However, once the sofa had appeared, it, maybe because of its comfortability, did not leave the house anymore. It became an irrevocable piece of furniture, symbol of ease and comfort. From a simple wooden bench with backrest, it transformed comfort thanks to stuffing and shapes.

The sofa in the 18th and 19th century

From the 18th century, the sofa has a leading role in the lounges and along the big walls of the living rooms and ball rooms, alternated to armchairs, benches and consoles. Here appear the beautiful sofas with mumps from Lombardy with everted and lock shaped armrests. In Veneto or Piedmont, armrests follow the voluted shapes and the most creative inlays. The gilding and the tapestry almost make the sofa a jewel. In this way, the Louis XVI, Impero and Napoleon III’s taste keep reigning throughout the 19th century.

The comforts of the 20th century

Things and houses change in the 20th century. The sofa enters smaller buildings and becomes a piece of furniture for everyone. In the first decade of the 20th century the structure is still firm, if we think of Thonet and Josef Hoffman’s small couches. However, already in the 20s, sofas and armchairs radically change look. Let’s think of Marcel Breuer’s seats or Mies van der Rohe, Le Corbusier, and again Eileen Gray’s.

The sofa in the living room

Nowadays, the sofa is amongst only in the living room, which is the room that inherited the function of past lounges. It is the place dedicated to otium, which can be reading, relaxing, meeting hosts, listening to music and then, inevitably, the vision of the magic TV screen.

In the 50s, the design of Eames and Scandinavian designers took to an ulterior aesthetic modification of the sofa often dictated by an ergonomic study. The sofa becomes an object to be decorated, sometimes in a crazy or experimental way between the 60s and the 70s, let’s be reminded of Verner Panton or the Italian Gio Colombo, De Pas, D’Urbino, Lomazzi or the Strum and Archizoom’s groups. They become purely stuffed from the 70s onwards until today, to set off the place of relax par excellence with Alessandro Mendini, Mario Bellini, Afra and Tobia Scarpa’s models. The 80s and 90s gave us a little bit of extravagance with Gaetano Pesce, Ron Arad, Philippe Stark, and Marc Newson.

Today, the designers and the furniture’s firms invite us to sit back on more and more linear sofas, more and more minimal and surely comfortable. However, the straight line can live together with a rococo lock, (maybe) less comfortable but filled with history and décor.