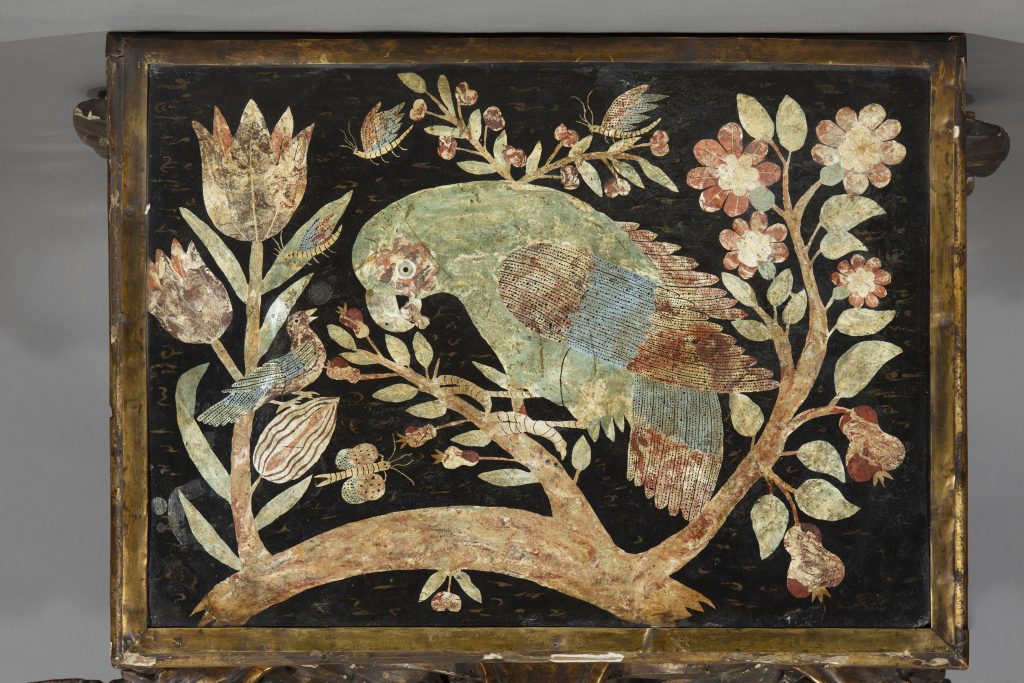 A particular type of gypsum obtained by powdered selenite and then kneaded with glues and colorants are applied, according to the drawing, on a wet gypsum base; once hardened, it is polished so that it assumed an as shiny as possible aspect to resemble marble. And this is the reason for the birth of scagliola: the imitation, with poor materials, of altar frontals, hard-stoners, countertops and surfaces inlaid with marble. The idea was that of rendering more easily and with simpler means those chromatic effects, those drawings and compositions very similar to the works in marbles and hard-stones, difficult to create, to get and expensive for many customers.

Munich and Blasius Pfeiffer are, today, two names that gave origin to the noble technique of scagliola. The forefather of a family of scagliola-workers, Pfeiffer left a first trace of himself in 1582, the oldest date to which the history of scagliola can be dated back. From them, this technique spread in Italy, specifically, in Carpi (Modena), in the Intelvi Valley, then Florence, Rome, Naples and subsequently also in other European countries such as England.

In Italy, the production of scagliola was imported from Germany by Guido Fassi from Carpi (1584-1649) towards the second decade of the 17th century. And the first Italian proof is a countertop signed by Pietro Baseghini from Modena dated to 1629. A little later, dated to 1648, is a countertop signed by Carlo Francesco Gibertoni, scholar, probably together with Baseghini, of Guido Fassi. In Carpi, as a matter of fact, an important production centre was created which carries on this technique for the whole 18th and 19th centuries.

In the Intelvi Valley the production of scagliola dates back to the 60s of the 17th century and names like Solari, Molciani, Rapa created works which we can find in a wide Lombard territory that goes from Maggiore Lake, the Ticino river, the area of Cremona to touch Piedmont. The production of scagliola reached Florence, a place of maximum production of hard-stoner, where parallelly the need of a ‘poor imitation’ of them such as the scagliola was born. Father Henry Hughford and Lamberto Cristiano Gori left some of the finest examples of scagliola’s works.

In the Kingdom of Naples, between the 17th and the 18th century decorated marbles and parallelly the scagliola enjoyed great success, amazing are two countertops in scagliola, on with great foliate and floral volutes and the other representing a mythological scene (Banco di Napoli collection). They are examples of a refined production of the half of the 18th century.

Around 1760, the technique of the scagliola arrived in England too to reach in the following years the summit with the production of Vincent Bellman company in London. The technique was widely used in the 19th century too, Robert Adam’s countertops for Neoclassicist furniture are to be remembered.