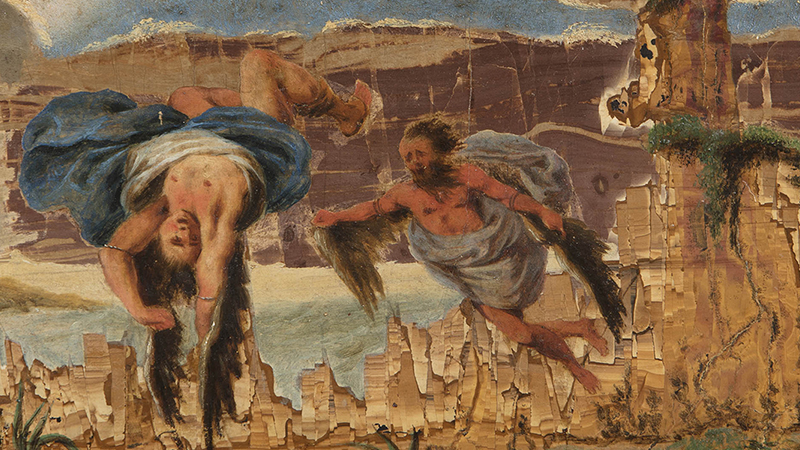 The painting on stone flourishes in Italy between the first years of the 16th and the half of the 17th century. Some ancient sources though, report the existence of a series of coloured marble panels, which decorated the apse of the Aula del Colosso in the Augustan Forum in Rome.

At the end of the 16th century, the use of stone as a pictorial base obtained such a great success that in the inventories of some important collections they are found in great quantity. Particularly in Florence, Rome and Verona, painting on marble support represented, on the one hand, a technical challenge and, on the other hand, a curious divertissement of painting on a sort of stage already prepared by nature. Two elements that corresponded to the curiosity and refinement of the Wünderkammer. In this way, amazing works of art were born on the veining of the marble, on the transparency of alabaster and as deep blue skies on lapis lazuli.

In Florence and Rome, where the manufactory of precious stones and marble was advanced, there was a wide usage of ruin marble. It is a stone, mainly extracted in Tuscany, made of solid limestone and clay with mineral solutions of iron and manganese. These solutions produce extraordinary drawings which appear as rocky landscapes, profiles of faraway castled cities, stormy seas. Generally, in the works in ruin marble the material itself is the protagonist, with its irregular cuts which delineate sceneries. It is enough to think that in the 17th century’s inventories of some collections, mainly Roman, these small pieces are indicated without any indication, neither of the authors nor of the subjects. However, artists of great fame both Italian and European, such as, for instance, Francesco and Jacopo Bassano, Giovanni Bilivert, Leonaert Bramer, Felice Brusasorci, Joseph Heinz, Antonio Tempesta widely used these stones.

The painting on stones slowly started to decay in Italy towards the half of the 17th century, the customers began to prefer bigger paintings to hang in the wide galleries. This typically Baroque taste ended up relegating painting on stones on a small scale to the rank of curiosity for collectors of small and refined objects.