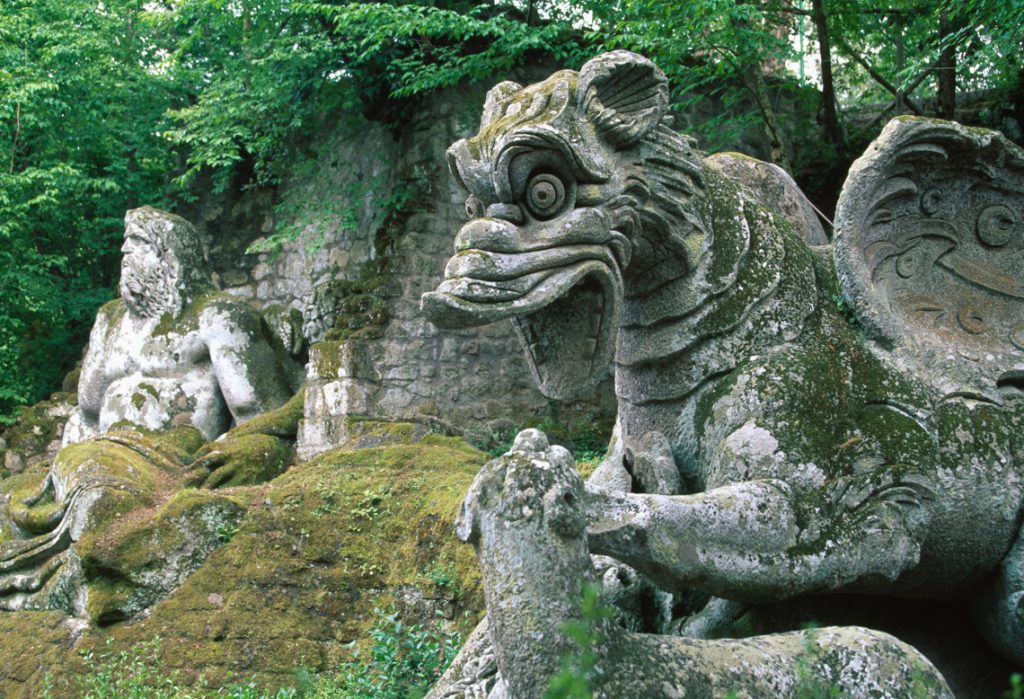 That any place in Italy is worth the journey is an axiom. However, there are magic places of art often fall out of fashion or far from the popular classic paths which are able to enrich our imagination or take us back to the past with great strength.

A park with the monsters of Jurassic Park wanted to raise wonder, fear and admiration already in the 16th century. Nevertheless, without diminishing Steven Spielberg, the Park of the Monsters of Bomarzo in the province of Viterbo has something more to say or to ask the spectator…

Places of art: the planning of the Sacred Wood

Planned by Prince Pier Francesco Orsini called Vicino Orsini and by the architect Pirro Ligorio in 1552, the park represents the example of that architectonic – naturalistic culture typical of the 16th century.

The “Sacred Wood”, as the creator wanted to call it, represents however a rarity among the places of art also for his time; as a matter of fact, it is not a classical garden in the Italian style planned following precise geometrics and perspectives, neither flowerbeds, nor calming water games.

Bomarzo is an irregular succession of sculptures in piperine’s rocks sculpted as monsters, dragons, mythological and exotic subjects, seats, obelisks often with engraved phrases, mottos or riddles, even a pending house. Difficult to decipher as released from the logic of the calculations that would normally rule the architecture of the landscapes; it has been a place of investigation for many scholars who attempted to decodify its building meanings and rules. It remains a surreal world where the vegetation inserts or acts as a curtain for the works in stone.

Let’s enter the mouth of the Ogre! On whose lip the following phrase is engraved: “every thought flies”.

Once the Pince that created it died, the park was forgotten but after centuries it has been revalued by the travelers of the Grand Tour such as Lorrain, Goethe and then by dreaming artists such as Dalì, until he became the scenery for an amazing documentary realised by Michelangelo Antonioni.

If you do not know which places of art to visit this summer, the Sacred Wood will surely be a magic place to rediscover!