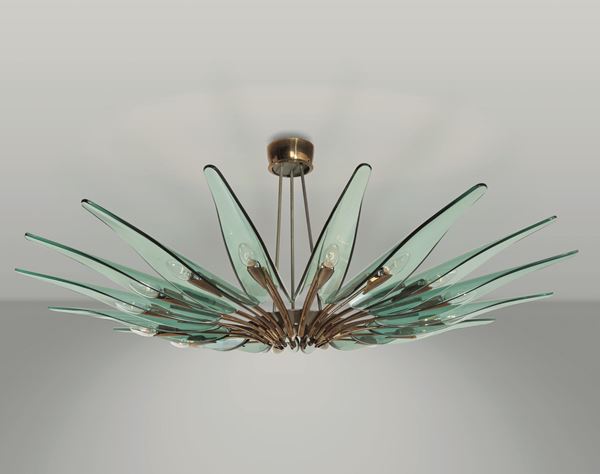 Maurice Max-Ingrand was born in Bressuire on the 20th December 1908 and died in Paris on the 25th of August 1969. The designer Max Ingrand is known as a French glassmaker, decorator and designer. As a matter of fact, he spends the majority of his childhood and youth in Chartres and is fascinated by the glass windows of its Cathedral.

During the Second World War he joins the reconstruction of the glass windows of the numerous churches destroyed by the war, and he also joins the ex novo edification of those of the church of Saint Jean Baptiste de la Rechèvres of its Chartres.

Its most famous glass window, however, is that of the church of Saint-Pierre in Yvetot, considered the biggest of Europe. We also remember those of Jaunay-Clan, Évreux, Pont-Audemer, Petit-Andelys, Azay-le-Rideau, Maisons-Alfort, Sartrouville, Blois and Pontoise.

He is famous especially for the window glasses, particularly realised for French churches and not only. Max Ingrand also contributes to the realisation of many civil buildings, public and private. Celebre are for example his decorations of the Normandie transatlantic, for which he realised mirrors for every bathroom.

The designer has been the artistic director of the company of Italian lamps FontanaArte for ten years. Known are his products realised for the company that remained in the history of Italian and foreign design.

As a matter of fact, beyond having the supervision of all the products of the company, he designed many himself. The model that reached the greatest success is model 1853, better known by the name “Fontana”. Soon it becomes an exemplar shape of the abat-jour in the whole world.

His famous lamp Fontana is still a best-seller today. He has been awarded in France with the Legion d’Onore.