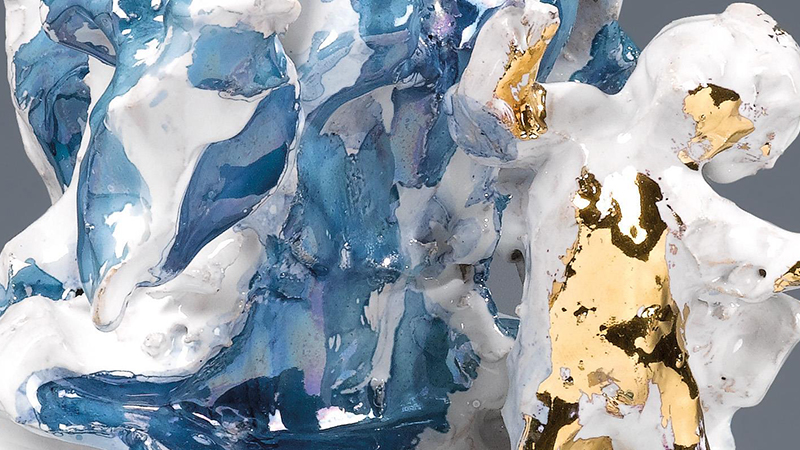 LUCIO FONTANA AS A SCULPTOR

Lucio Fontana begins his artistic career in the study of his dad, a sculptor of Rosario, in the Argentinian province of Santa Fè. In 1927, once back in Milan, Lucio attends the Academy of Fine Arts in Brera where he follows courses of the School of marbles and of the symbolist master Adolfo Wildt. As a matter of fact, he is deeply influenced in his education period for the classic smoothness and purity of his sculptural surfaces.

“I am a sculptor, not a potter. I have never made a bowl with the lathe or painted a vase. Mouldings and colour shades bore me. And I find the mystics of the technique terrible. What is produced in Sèvres and Copenhagen with that beautiful technique is suitable to the taste of old women and collectors. They celebrate fragility and halftones. I look for something different. […] My plastic shape from the first to the last models is never detached from colour. […] Material was devastated by an earthquake but still. The critics talked about ceramic. I called it sculpture.”

Between 1929 and 1931, thanks to the sculptor Fausto Melotti, he starts getting into contact with various avant-gardist architects from Milan and, after meeting the futurist Archipenko and the surrealist Zadkine, he begins to detach from the classical plastic composition of Wildt and to produce pieces in open fracture with the academic models. In these years, his art declines through various disciplines: figurative reliefs in terracotta, architectural interventions, engraved concrete tables and also sculptures.

Towards the half of the 30s, he starts dedicating himself to pottery, realising pieces both figurative and threadlike and abstract. The sculptures characterising this period are important precursors of Spatialism theories, which he would later develop. As a matter of fact, these works take on dynamism, spontaneity and mostly spatiality; the swirling arabesques and the changing shapes articulates the claims of the Manifesto Blanco in three dimensions in relation to the masters of Baroque, who “expressed the nature in terms of dynamic and had established that movement is an innate condition of material” (G. Ballo, Lucio Fontana, New York, 1971, p. 186). Furthermore, colour has great importance and never detaches from the material, which does moves in space with freedom of expression.

“From Black man 1929 the problem of making art instinctively clarifies in me, neither painting nor sculpture or lines delimited in space, but a continuity of space in the material.”

In March 1935, he participates in the “First collective exhibition of Italian abstract art” in Turin contributing to the drafting of the presentation manifest and adhering to the French movement Abstraction-création. Between 1936 and 1940, Fontana increases his activity as a potter in the laboratory of Tullio Mazzotti in Albisola, where he experiments more with this material, with which he will create sculptures in polychrome, golden and silver marbles. Some of these pieces are narrative representations, while others have an almost symbolic character: battle scenes, warriors, masks or religious subjects such as the Crucifix or the Madonna with the Baby.

“Material was attractive; I could model a sea bottom a statue or a bunch of hair and impressing a virgin and compact colour which fire amalgamated. The fire was a sort of intermediary: perpetuated shape and colour.”

His works become more and more important and are often object of exhibitions and contests until, in 1936, the first monograph dedicated to the book, written by Edoardo Persico, is realised.

In the following years, he spends some time in the Manufacture Nationale de Sèvres, where he works again intensely on ceramics experimenting with new techniques. Fontana’s sculptures are such an elegant balance given by informal art, new Baroque expressionism, representation, abstraction, meditation and spontaneity. Between the 40s and the 50s, he takes on a technical capacity that allows him to free his inspiration, creating so vivacious, spontaneous and extremely expressive sculptures.

For further in-depth analyses visit the section FOCUS ON.