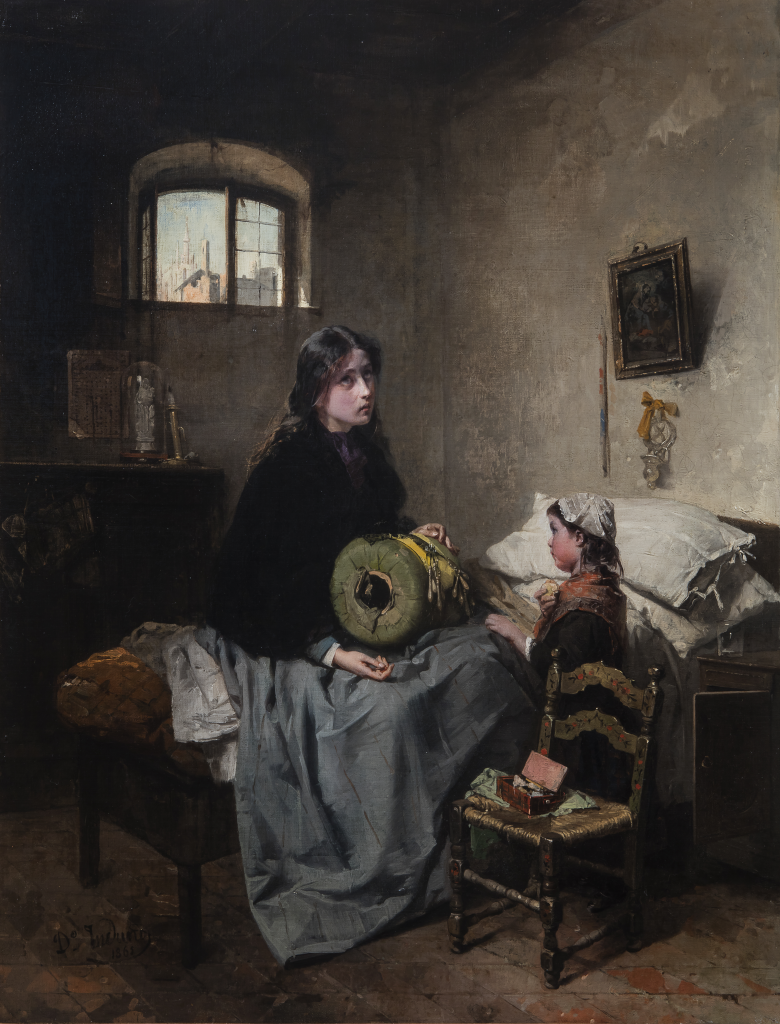 Lombard painting of the 19th century

Many of these had already been sought-after during their lives thanks to the art dealers of the 19th century such as Adolphe Goupil.

His works are mainly characterised by reduced dimensions, becoming true miniatures. His brush stroke reclaimed the great Italian painting of the 18th century to paint his Urban views and real-life perspectives of monuments, architectures and Lombard and Milan’s landscapes.

Of Migliara, it is possible to admire the Porticato di Sant’Ambrogio (St. Ambrose’s colonnade). The fixè is also famous, which is a painted miniature on silk and then applied on glass. The collection of his works is massive, stored at the Pinacoteca of his natal city, completed in a decisive way by the vast bequest of Teodolinda Migliara.

The Induno brothers, instead, Gerolamo and Domenico, document the Wars of the Resurgence. Gerolamo Induno represents a perfect interpreter of the resurgence’s epoch, impregnating his pictures with heroism and patriotism. Among his more popular canvases, Imbarco a Genova del generale Giuseppe Garibaldi (General Giuseppe Garibaldi’s boarding in Genova) and Battaglia di Magenta (The battle of Magenta). Whereas, his brother Domenico is author of the Portrait of Goffredo Mameli and The thinking beauty.

Mosè Bianchi was born in Monza in 1840 and died in the same city in 1904. Once the technical studies were done, he joins the Brera Academy in Milan. He becomes an advisor of the Academy in 1871.it is admired by the contemporaneous Antonio Fontanesi and Domenico Morelli, especially for the extraordinary modernity of his painting.

Angelo Morbelli begins his artistic activity in the music field, however, due to health problems, he leaves music prematurely and dedicates to painting. The recurrent themes in Morbelli are initially connected to the interpretation of humble characters of reality.

The valuation of the paintings of the 19th century

Evaluating paintings of the 19th century means considering and relating various aspects. Those elements are connected to the current art market, which keeps into account the various trends and tastes of the collectors.

The valuation of a painting of the 19th century is mainly given by the citations of the author which realised it and by the quality but also by the conservational state, dimensions, pleasantness of the subject, provenance and historic-artistic relevance.

In our Gallery section you can admire some of the paintings of the 19th century on sale or sold at our Gallery.