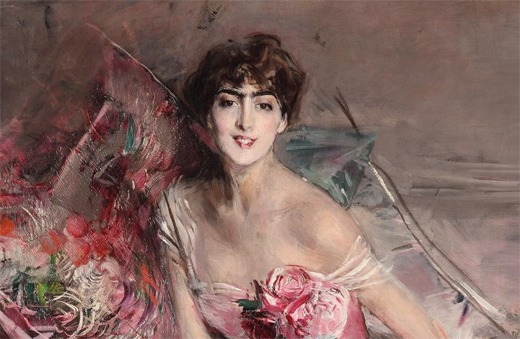 Giovanni Boldini was born in Ferrara in 1842, the mother was from Ferrara and the father from Spoleto. He was one of the most sensitive interpreters of the charm of the Belle Epoque. He shows from the very beginning a natural talent for art, before starting writing he fills up his notebooks with sketches and drawings.

The figure of the father had a pivotal role in his pictorial preparation. In fact, Boldini starts painting under the guidance of his father Antonio, painter and restorer, bringing immediately to light his capacities.

Boldini specialises in the reproduction of some paintings of Raffaello and, at the age of sixteen, he perfects himself by attending Girolamo Domenichini’s painting classes. In 1860 he carries out portraits for the bourgeoisie of his city.

In 1862 he moves to Florence enrolling at the Accademia delle Belle Arti. In this city he becomes friends of Gordigiani, Signorini and Banti that he encounters at the famous Caffè Michelangiolo. The painter attends more and more assiduously the bourgeois and international milieu of Florence.

His movements around Europe: Paris and London

1867 represents an important date for Giovanni Boldini, in fact in that year he moves to Paris in order to visit the Exposition Universelle. The French city represents for the painter the possibility of success and recognition. In fact, in Paris he has the opportunity to meet painters as Edouard Manet, Alfred Sisley and Edgar Degas.

In those years, Paris was transforming in a real cosmopolitan city. Boldini feels welcomed in a free and modern atmosphere in which he could finally give vent to his dynamic and eclectic nature.

Boldini visits also London, where he paints in a very equipped atelier of the city centre, an area frequented by the English aristocrats. The Londoner experience, even if it lasted only a year, will allow Boldini to enter in the European salons and to become one of the most esteemed portraitists.

The following year, the painter moved back to Florence, however his stay in the Italian land does not last for a long time. Boldini is aware of the fact that the adhesion to the movement of the Macchiaioli would inhibit his creative impulses. Therefore, in 1872, he definitively moves to Paris and he will remain here till his death.

Boldini is mainly known for his famous portraits that are characterized by an elegant style and delicate brush strokes. Boldini’s women are elegant, extremely beautiful and conceited. With his portraits he rendered immortal the most in vogue women of Paris and of Italy of the end of the nineteenth century.

His most renowned portrait is that of Luisa Casati Stampa, painted in 1908. The painting embodies the flawless elegance of the marquise and it perfectly explains the worldliness typical of the Belle Epoque.

The painter not only portrays women, but also passer-by people, café’s customers and celebrities, for instance the famous composer Giuseppe Verdi, portrayed in 1886.

It is difficult to ascribe Boldini to a specific artistic movement. In fact, he is an extremely eclectic, versatile and creative artist. His artistic production blossoms with the Macchiaioli, it triumphs with Impressionism and the Symbolist style and it ends with the period in which in Italy the historical avant-garde reign.

With the arrival of the First World War the activity of Boldini becomes less intense, also due to his sudden vision loss. However, in 1919 he was celebrated with the title of the Légion d’honneur and of Grand Officer of the Italian Crown.

Boldini was quickly forgotten right after his death, but he was soon rediscovered during the Seventies, when he became an inspirational figure for the futurists thanks to his concise and quick brushstroke.