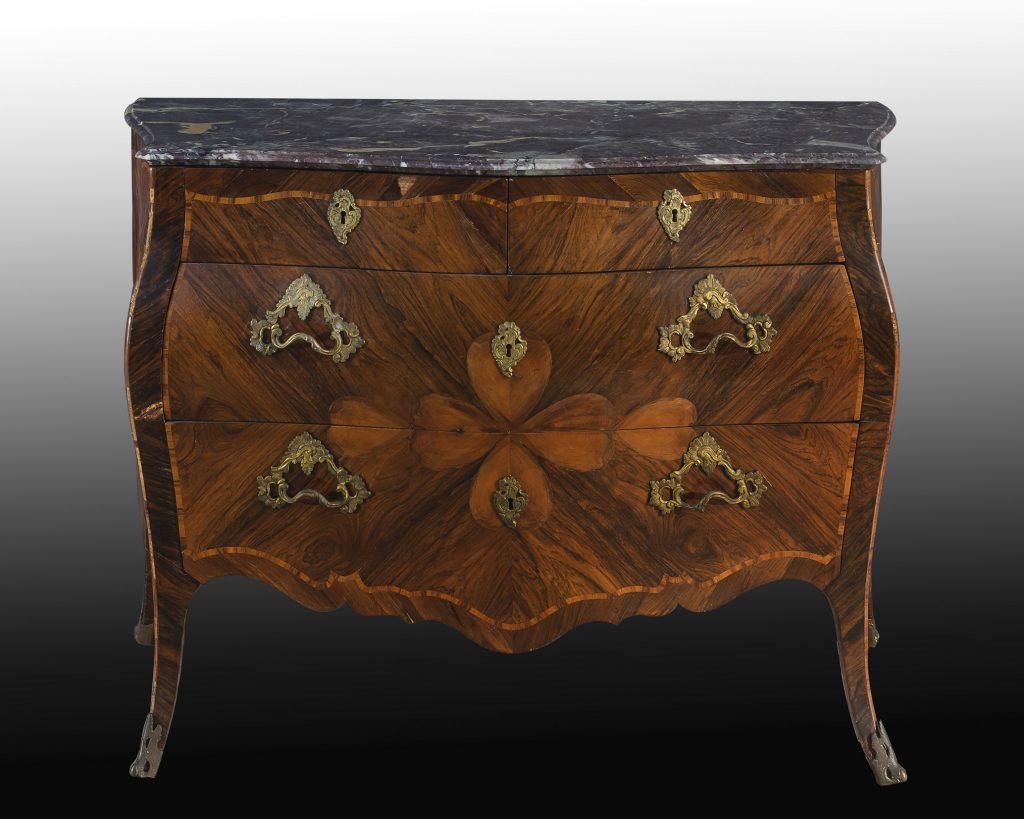 With no doubts, Genova’s cabinet-making of the half of the 18th century takes French art as a model in the choice of woods, in the rounded shapes, in the application of the veneering technique. However, Genova’s furniture is highly recognisable in the panorama of decorative arts because it distinguishes itself with a refinement never too manifest. An elegance far away from the excesses and useless redundancies. It can be said that it is more aimed at the intimate satisfaction of the commissioners rather than at the display of richness.

The qualities of the “bancalari”

As in Venice the “Marangoni”, so in Genova the “bancalari” were reunited in corporations. Only the bancalari had the exclusive right to make and sell furniture. In Venice, the lacquer decoration was the cipher that characterised the most production of furniture of the 18th century. While in Genova was the skillful use of the veneering technique in woods of different essences. In Genova, thanks to Florence’s trades, many exotic kinds of wood were in use such as rosewood, Indian walnut wood, besides the bois the violette and the bois the rose.

In the furniture from Genova the essences were often alternated. The herringbone layout surface is a background to the celebre centrals in the shape of a leaf with four lobes, “four-leaves clover-shaped” or in the shape of a “heart”. The four-leave clover or heart decorations constitute the fulcrum of the furniture’s decoration, so that the preciousness of the work can be measured from the complexity of the composition and the numbers of hearts that shape the drawing. As an explosion of petals and hearts that radiates on a front or a plan.

These typical decorations can be found on many typologies of furniture: commodes, drop-leaf commodes, flapped doors drop-leaf commodes, corner tables, bedside tables, flip-tops, worktables. Mainly furniture with moving shapes, rounded fronts and sinuous sides. At the same time, however, surprisingly simple and elegant. Often, they are only illuminated by handles in golden bronze or slightly outlined on the corners or from the usual little shoes with whom the thin sabre-shaped legs end. The countertops are almost always in marbles that, either in harmony or in contrast of colour, complete this refined mise. Countertops in splendid Spanish brocatelle, in peach’ flower or French debris, to cite some of them.

In the intimacy of the rooms

The environments furnished by these pieces of furniture were the most intimate, the ones dedicated to rest, recreation or work, which are the private living rooms, bedrooms and studies. Often, we are dealing with furniture that, beyond the decorative refinement, hides a complex construction. Not rarely they guard secret mechanisms and small hidden drawers, especially when dealing with diplomatics, small writing desks, worktables or bonheur du jour.

Antichità Giglio boasts many examples of furniture from Genova of great beauty and rarity that passed through the Galley in the last years. Among the new arrivals there is a splendid example of commodes “with hearts”. The body is moved with a front with two drawers and a smaller one below the countertop. It is entirely decorated with panels in a herringbone layout to center a motif with six hearts, inside a single frame that follows the line of the front, the sides are moved and present the same decoration, the legs are saber shaped and the countertop in peach’ flowers marble. Our invitation, thus, is to touch with your own hand that which the bancalari from Genova left us from the middle of the 17th century to today.