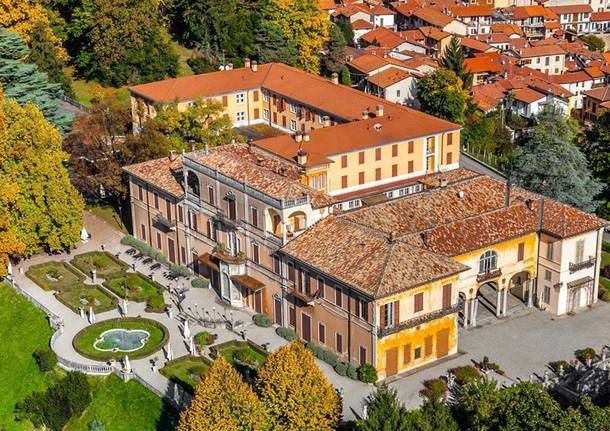 Invitation to the villa

The richness of the Italian artistic heritage is incomparable, it could be defined as the art lung of the world. The Italian heritage can be found in the monuments, the churches, the museums but also the art people that created and wanted them. Whoever wished to know these men could do it by visiting their houses and rooms and entering in the intimacy of their passion. We suggest a walk in Villa Cagnola. It is a chest which stores an amazing and important art collection which was born in the half of the 19th century, and which continues through the first half of the 20th century thanks to the will and passion of Carlo Cagnola and his son Guido. The collection includes old master paintings, decors, sculptures, ceramics, tapestries, everything of great quality. Here is a brief tour.

Among the old master paintings, excellent names stand out and you will be able to walk between an “Annunciation” of Antonio and Bartolomeo Vivarini, a “Mary on the throne with the Baby” of Jacopo Bellini, two canvases of Brueghel, a “Capriccio” of Francesco Guardi and a work of Pietro Longhi.

The pieces of furniture that you can admire in the villa show a certain inhomogeneity of epochs and manufactories where Lombardy is well represented but also the entire peninsula with Venetian chests of the 16th century, golden wood sculptures from Genova from the area of Filippo Parodi, commodes from Genova and Rome from the 18th century, and French pendulum clocks.

Ceramic is the passion that made Carlo Cagnola one of the greatest experts of the time on the matter. The main character of the collection is the porcelain gathered by Carlo and later by Guido to the point that there are more than a thousand exemplars exposed. In the wonderful showcases you can find objects that cover the entire European production of porcelains of the 18th centuries beyond some true rarities in the manufactures. Meissen, Ansbach, the manufactory of Vienna, Zurich, Nymphemburg and then Vincennes-Sèvres are represented. Italy is represented at its best by Ginori a Doccia, Vezzi, Cozzi, Capodimonte and Real Fabbrica of Naples. In the majolicas’ collection you can find pieces of notable preciousness too, even though there is a disparity in the number and rarity of the pieces in comparison with the porcelains. You can notice a big ornamental robbiano vase of the 16th century or a beautiful, illustrated plaque from Urbino with a painting taken from Raffaello and the wide collection of majolicas from the 18th century. Inside the collection of ceramics those Oriental are not missing with consistent groups of Celadon, Imari, Pink Family and Blanc de Chine.

The twenty-one tapestries of the collection, which you meet among the rooms of the ground floor and the staircase, represent one of the main collections of Lombardy and includes fabrics from the Flanders of the beginning of the 16th century, works of the manufactory of Brussels of the 17th century and of Oudenaarde, works collected by Carlo Cagnola going against the tide in comparison with the fashion of the second half of the 19th century which tended instead to the dispersion of tapestries.

If this small world tour raised the will to go see from real these wonders, Villa Cagnola is located in Gazzada Schianno, province of Varese. On a beautiful day, to regain contact with the world after the visit, you can walk in the park with a view on the Lake of Varese, among the flowerbeds of the Italian style garden and precious exotic species…and remember to send us a greeting from there if the advice has been appreciated.