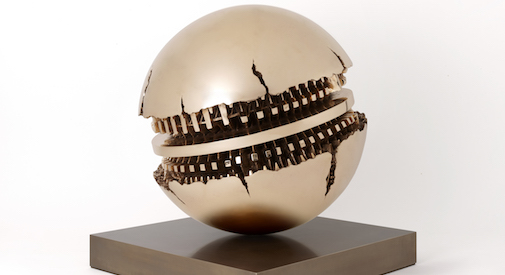 Arnaldo Pomodoro was born in Morciano di Romagna on 23 June 1926, he is a famous Italian sculptor and goldsmith, considered one of the greatest contemporary Italian artists. The sculptor is famous and appreciated also abroad.

His favorite material is bronze, Pomodoro is in fact known especially for its peculiar bronze spheres. He studied as a surveyor but he soon dedicated himself to sculpture with great passion. During his life, however, the artist’s interests are varied, including his love for theatrical activities, and graphic and poetic research.

His monumental sculptures in bronze are very famous, but during his carrer, the artist used many different materials, including gold and silver, iron, wood and concrete. She refined her style by being part of the informal group “Continuità”, with Lucio Fontana.

His art is a continuous oscillation between the balance of geometries and internal mechanisms that intrigue and amaze the viewer.

During the nineties, the artist’s appreciation grew more and more and culminated with the birth of the Arnaldo Pomodoro Foundation, recognized by the Ministry of Cultural Heritage and which deals with the protection of Italian heritage.

Again in the nineties, Pomodoro founded a center for the Artistic Treatment of Metals, where the sculptural processing of unconventional materials is taught.

The style of Pomodoro

Arnaldo Pomodoro is undoubtedly influenced by the art of Paul Klee, Umberto Boccioni, Alberto Giacometti and the Englishman Henri Moore.

The fundamental requirement of the sculptor’s works is the attention to the forms. In his art, every shape tends to the volumetric essentiality of sphere, cube, cylinder, cone or parallelepiped. Such volumes are “cut” and their repetition is comparable to gears hidden inside huge containers. Pomodoro in fact uses geometric volumes to break them down and discover what is inside.

Another fundamental requirement of his style is the monumentality of the works. However, the external space is as if it did not exist, the curious viewer is projected inside the works. The interiors are enclosed by smooth walls and sharp volumes.

The artist’s message is clear and at the same time innovative, his works are a cry for freedom: a real hymn to creativity and vital force, all enclosed in volumes that evoke an archaic sacredness.

The works of Pomodoro

Among his works, we remember the Colonna del viaggiatore (1962) of Spoleto, the first large volume work created by the sculptor. In 1966 he created the Sfera grande, a three-metre-long commission for the Montreal Expo.

In 1991, instead, his work Disco Solare was placed in front of the Moscow Youth Palace.

The following year, Papyrus, another large work, was placed in Darmstadt, Germany. In 1996,  the famous work Sfera con Sfera, with its more than 3 meters in diameter, is placed in the square of the United Nations in New York.

Two years later he designed the portal of the Cathedral of Cefalù, in Sicily.

In general, given the grandeur of its structures, these are commissioned and built for numerous squares and open spaces including Milan, Brisbane, Copenhagen, Los Angeles and Darmstadt.